After three years away, I was curious to see what Narita airport would look like compared to Incheon where I had just been two weeks before. It’s one of Asia-Pacific’s slowest airports to recover – Incheon is second in recovery after Singapore – and although Japan fully reopened on October 11, Narita felt like a shadow of herself.

It was around 5 p.m., most of the shops were closed and everyone was wearing masks, which was compulsory. It was like Changi at the beginning of the reopening around March 2022. There were staff driving passengers in two lines – one for those entering Tokyo and another for connecting passengers like me.

It felt like over the past few months I had been on a Covid time travel path through Asia – places fully open to partially open.

Arriving in Los Angeles, there’s no doubt that it’s at the end of the time-travel path – crowded, hardly any masks in sight, a hubbub of activity. Immigration was quick and painless and as I was collecting my bag to re-register for Phoenix (a pain point I wish I could resolve) a beagle followed the trail of the passenger in front of me and started barking at the one of her Bags. “Must be our dog treats,” laughed the woman. “Maybe it’s chewing gum,” her friend said.

I learned that everything is gummy these days in the US – vitamins, sleeping pills and weed. I went to a store (I think it was called Sugar Rush) in Scottsdale, and there were gummies in all shapes and sizes.

Everything is also pickle ball these days – and you wonder how a fad becomes a trend and then becomes “a thing” – like bubble tea or Mala hotpot. A 2022 report from the Sports & Fitness Industry Association called it the fastest growing sport in America, with 4.8 million players nationwide (an increase of nearly 40% from 2020) . There are now about 35,000 courts in the United States, more than double the number five years ago.

I was told that the reason pickle ball became so popular so quickly is that as Americans got older it was considered the more distinguished game than squash or tennis. “Maybe it’s just that we’re getting bigger,” said an American friend.

At Phocuswright 2022, being held at the JW Marriott Desert Ridge, pickle ball is one of the pre-event activities on offer, and it has been fully subscribed, along with hot air balloon rides.

The taxi driver who took me from Sky Harbor airport to the hotel (couldn’t get an Uber, too busy) told me he left Bangladesh 18 years ago . He broadcasts the prayers of the Koran in his car.

He reminds me of taxi drivers in Asia who have no qualms about asking personal questions like “how much money do you make?”

He goes on to tell me that he speaks Bengali and it is the sixth most spoken language in the world. “No. 1 Chinese, No. 2 Spanish, No. 3 English, No. 4 Hindi, No. 5, Arabic – Bengali No. 6.” I absorbed my language course quietly, after 24 hours of flying I wasn’t about to argue over whether Portuguese or Bengali was #6.

“America, best country in the world. Best economy. Best currency,” he told me. I nodded. That was another conversation I wasn’t going to get into.

I hope my monosyllabic answers will stop the conversation, my head is not attached to my body at this point.

“Can you advise me?” And he told me how he bought a ticket online to Bangladesh for his annual trip, but his wife was diagnosed with cancer and he had to cancel, and how could he get his refund. He hadn’t purchased insurance, but could he purchase insurance two weeks before his flight and then cancel and get reimbursed?

I felt bad for him but I had never felt more relieved than when we finally arrived at the hotel. But my poor new friend – he’s just another anxious traveler who doesn’t know how our industry works.

The theme for this year’s Phocuswright conference is “Travellers. Titans. Trail Blazers”. When I first traveled to Arizona nearly two decades ago, I experienced everything a first-time traveler does here – walk the Grand Canyon, ride a horse with a handsome cow- boy, learn line dancing in a living room and hear the rattle of a snake outside my adobe ranch door. 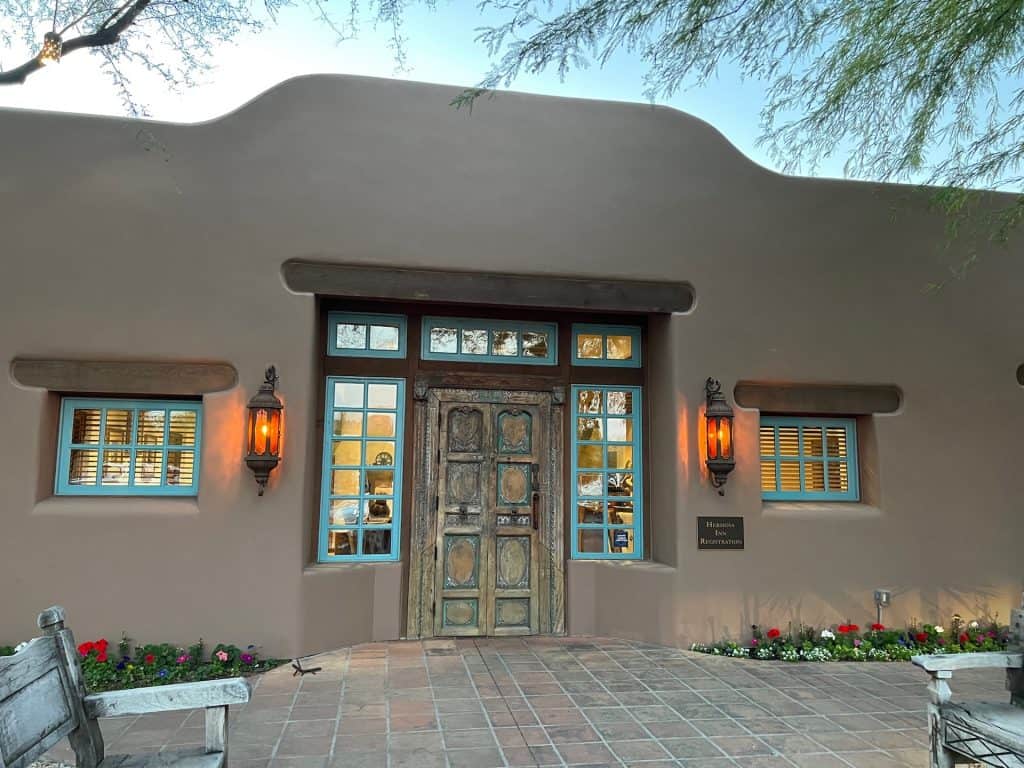 I love desert landscapes, something timeless and primordial about them. Apartment. Wide. Open. And “cacti” everywhere. They look like giant sticks doing yoga poses. I learned that all cacti are succulents but not all succulents are cacti. You don’t know what to do with this information, but be careful when walking through the streets of the old town, you don’t want to walk into a thorny succulent.

At night I look up to the sky – twinkling stars everywhere and the moon seems bigger here too, like the food portions.

Did you know that the titan of the cactus is the saguaro cactus, which normally reaches heights of 40 feet (about 12 m), or about 10 of me. The largest saguaro ever measured stood over 78 feet (about 24 m). You wouldn’t want to bump into any of them in the dark.

My first night here, I stayed at Hermosa Inn, a boutique hotel in Paradise Valley. Famous local artist Lon Megargee led the way when he built this private escape for himself in the 1930s. His artwork of local landscapes, Native Americans and cowboys still adorns the walls of this charming accommodation. Sunset cocktails are popular here – sipping tequila cocktails while watching the big orange ball of fire cast all sorts of shades of pink and gold across the wide, open sky as it retreats to the night is typically Arizonan.

For dinner, I head to The Mission, the restaurant next to the first hand-built Native American church in Old Town. The guacomole that is made at your table is a must – a warning, after tasting it, you will never eat guacomole anywhere else. (Video below)

As a traveler, I think I’m a bit of a foodie titan and a pioneer in terms of conversations with taxi drivers.

Bulgaria: taxi drivers demonstrate en masse after the murder of one of their colleagues last night – Novinite.com

Taxi Drivers organize a mass demonstration after their colleague Hristo Traikov was killed last night in the “Rassadnika” district of Sofia. Demanding that the Home Office do its job and thwart criminals who commit murder, the Drivers demonstrated in front of the third department of the capital’s regional police, and at night they also blocked […]

Taxi drivers and all other motorists are urged to BELT UP as the annual crackdown on seatbelt use begins this week. Officers across the country will be out in force looking for anyone who is not strapped in to support the National Police Chiefs Council (NPCC) annual seatbelt operation. The campaign, which runs until Sunday […]

By Kari McMahonMedill Reports Out-of-state drivers for transportation services such as Uber and Lyft could be banned from driving in Chicago if 32nd Ward Ald. Scott Waguespack’s proposal is voted on in town hall. Waguespack’s proposal would amend the Transportation Network Providers Ordinance, a Chicago law passed in September 2014, which provides a regulatory framework […]